One of the fun things I got to do at Microsoft was to design our swag giveaways for conferences like NeurIPS and CVPR. We had lots of fun ones, such as [nontransitive dice] but two that I was involved in were card games. 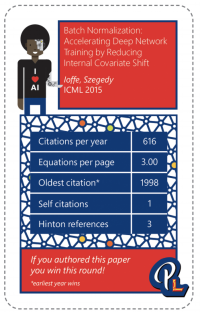 “Paper legend” was first released as the “Computer Vision edition” at CVPR 2017, and then a “Machine Learning edition” at NeurIPS 2017. Based on the popular British card games in the “Top Trumps” series, it comprised 36 cards, each referring to a particular academic paper, published in those and related venues (e.g. ICCV, ECCV, ICML, ICLR, T-PAMI etc). The card contains several stats about the papers, and the aim of the game is to win opponents cards by choosing the stat on which your card is most likely to win.

The detailed instructions are [here], and I can assure you it's quite good fun to play. We took care to ensure that no card is too strong or too weak, so it's not just the case that whoever has AlexNet wins… 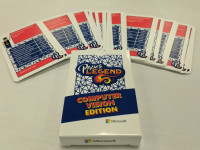 Print your own with these PDFs: Computer Vision, Machine Learning #1 #2

There's a writeup at ruder.io. I like that someone found it was inspirational for a New Year's Resolution

We also did a version of Cards Against Humanity, which was fun, and we saw several games being played around the conference.